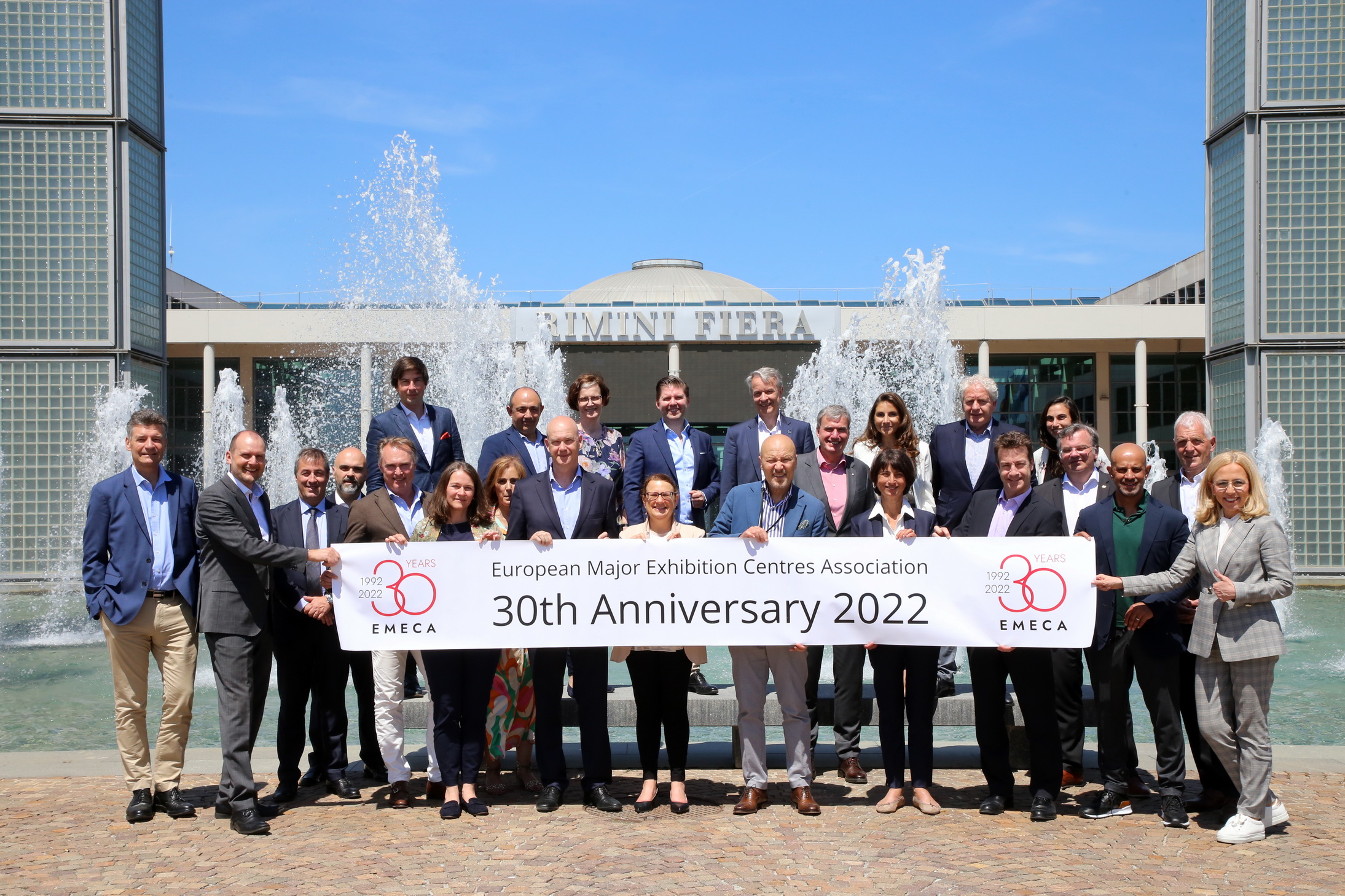 During the last GA, EMECA Members report exhibition activity is back with busy calendars in 2022 and full recovery expected 2023/2024. For this year 2022, the average turnover may reach 87% of 2019. In addition, ExCeL London (UK) has become new EMECA Member and linked to the 30th Anniversary, an award for young or start-up organisers launching new shows is being created.

Back to Business for national and European exhibitions

Italian Exhibition Group hosted this spring’s EMECA General Assembly at Riminifiera which also marked EMECA’s 30th Anniversary. “Many Members have been running events since before or after summer 2021, some had to close again in the winter due to the pandemic situation, but since April 2022 all EMECA venues are again fully operational and bring back successfully a multitude of live trade fairs and events. It is great to see our industry thrive again”, declared EMECA President Ricard Zapatero.

All EMECA members are nearly fully booked except for those hosting or organising highly international events. The estimated average 2022 turnover across the EMECA members may reach 87% compared to 2019, the last pre-pandemic year. This strong activity is also due to postponed events in addition to the usual scheduled ones.

Assuming as stable development without any further major external shocks, the expected dates of full recovery to pre-pandemic levels of business are 2023/2024 while a few members named 2025 until even 2026. The reasons are important shares of business with overseas clients from/in Asia and the biennial or even triennial cycle of exhibitions held at the respective venue. National and European exhibitions are working very well with nearly pre-pandemic numbers of attendees, the recovery of international trade fairs is still restrained as exhibitors and visitors from some key markets overseas cannot attend.

The Pandemic effects and war conducted by Russia in Ukraine and the sanctions’ impacts do not directly affect the EMECA members to a high degree, while they generally bring a new round of uncertainty and indirect effects mainly concerning energy prices, inflation, supply chains, providers, staff and wages. These effects also concern the clients, exhibitors and visitors. Some sectors are hit especially hard, such as for instance the ceramics industry; this affects related events and therefore indirectly also from this side the trade fairs; In contrast, other sectors’ events are very healthy or even booming, for instance health, security and horizontally cross-sectorial digital and green innovations.

The strong physical rebound proves that the pandemic strengthened the face-to-face business model. Exhibitors and visitors are eager to meet in-person again, confirming that networking, new business and creating trust among business partners is less successful online. Nevertheless, all venues and organisers improve constantly the level of their digital offerings and services for the clients.

The General Assembly approved ExCeL London as a new member to the venues’ association which brings the total number of members to 24. “We are delighted to welcome another major venue and key player from the UK to EMECA. This increases representation from this important, highly innovative and agile market among the members”, explains Ricard Zapatero.

Award for young or start-up organisers

In order to mark the 30th Anniversary of the association, EMECA plans to launch an award for young or start-up organisers, who establish new exhibitions at one of the EMECA venues. “The aim is to draw attention to new organisers and show themes to highlight the innovativeness and attractiveness of our industry to young generations”, explains EMECA President Ricard Zapatero. Trade fairs and business events will be the strategic tool to implement the green and digital transition in a successful and speedy way across all industrial sectors. This award shall encourage young and smaller players to invest and innovate in the exhibition market. More details will be published in due course.

Before the pandemic, the EMECA Members hosted and organised nearly 2.000 trade fairs a year globally, out of which 1.550 in Europe on a gross rented space of nearly 38 mio sqm. They welcomed nearly 500.000 exhibitors and roughly 38,5 mio visitors in Europe (pre-pandemic figures).